Today we’re heading for Thanbyuzayat, for tourists best known for the Death railway museum. To get there, we’re condemned to road nr. 8, and we’re not very happy with that – but we’ll survive.

We plow our way on the busy, bumpy road and roughly halfway towards Mudon, we visit Win Sein Taw Ya, a giant reclining buddha of almost 200 meters length. On the access road, a line of hundreds of large monk statues holding alms bowls guides visitors towards the entrance gate. The reclining Buddha is filled with rooms that showcase dioramas of the teachings of Buddha and a shrine. Apparently, the access road is also the spot for some kind of morning market that has just ended, and we’re overwhelmed with the piles of rubbish and litter that is lining the roadside. 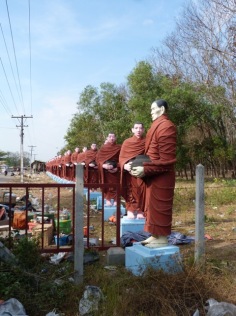 While approaching the site, we turn out to be an attraction as well, granting lots of requests from families and groups to pose on their pictures – with the group, with mother, with father, with the daughters, alternating Juul and me together or me or him alone. Gradually, this has become the standard ritual that takes place as soon as we visit sites that attract mainly local tourism … and we’re loving it. It is always good fun, and it is fantastic to experience how much warmth, joy and smiles one can exchange past the language barriers. We feel like popstars and it will be hard for us when we head back home where no camera’s are flashing and no people will cheer us in as soon as we appear somewhere!

At the end of the day, after more dense and heavy traffic, exhaust gasses and rubber smell, we’re happy to reach the lovely Holiday Villa Motel at Thanbyuzayat – a place that was sorted out for us by the staff our hotel in Mawlamyine. To our knowings, this one of the few -if only- places in town that accepts foreigners. It’s clean, friendly and has spacious rooms for 35.000 kyats a night. 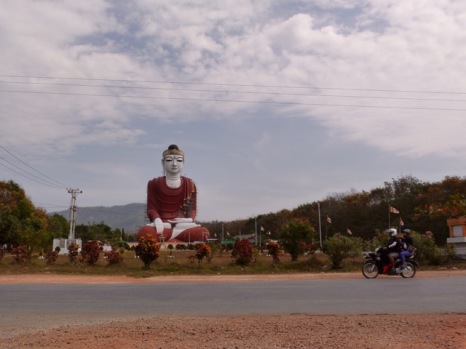 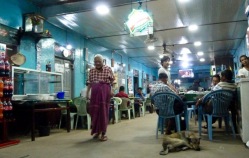 Our host annex storyteller at the restaurant

At nighttime, we visit the war cemetery. The notorious Burma-Siam railway, built between October 1942 and December 1943 by Commonwealth, Dutch and American prisoners of war, was a Japanese project driven by the need for improved communications to support the large Japanese army in Burma. The graves of those who died during the construction (approximately 13,000 prisoners of war and 80,000 to 100,000 civilians) and maintenance of the Burma-Siam railway (except for the Americans, whose remains were repatriated) were transferred from camp burial grounds and isolated sites along the railway into three cemeteries at Chungkai and Kanchanaburi in Thailand and Thanbyuzayat in Myanmar. There are over 3,000 Commonwealth and 621 Dutch burials of the Second World war in the cemetery.

Our visit to the war cemetery is further provided with context and stories by the host of one of the local restaurants, an almost 90-year old local entrepreneur that is relatively fluent in English and tells us stories of the time back then.

Do you consider Myanmar as a destination for your next cycling trip? Then you’re at the right spot! This blog contains stories and loads of information and tips that will help and inspire you in planning a trip to this wonderful country. Also, it bundles other blogs and sites on cycling in Myanmar.

With this website we hope to inspire and inform other cyclists. Crawling its way out of decades of military oppression, the country is opening itself to visitors. It is very special to be a witness, spectator and part of that, in all its visible and invisible, joyous and sometimes painful aspects.

Just bike, relax and see. The adventures will come by themselves.