Riding a bike in Yangon – is it dangerous?

The first time we rode a bike in Yangon was an exciting event. It was wonderful to curb the streets that were so busy with motorised traffic, and to move as fast -or even faster- as them. We got more and more confident and at the end of our trip, we even drove our bikes during nighttime through the city.

Last januari, when we visited Myanmar for the second time after five years, jumping on the bike and drive right into the citycenter, was one of the first things we did after checking in our accommodation in Yangon. But, the increase in traffic and congestion was striking, just as the deteriorated air-quality. After driving around one day, we decided to use other types of transport the next day: via the smaller roads we cycled to the water-taxi boarding point to take one to the city center. 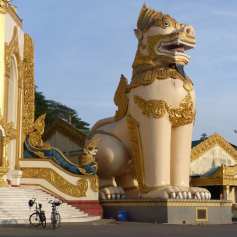 Biking to the Shwedagon pagoda

We also noticed something else. There were quite some other cyclists in Yangon. Before there was the occasional one, next to the many trishaw drivers. But now there were also young, local cyclists, mostly of delivery services. How are these -often- guys experiencing traffic conditions and how do they navigate the city … and how dangerous is cycling Yangon actually?

We didn’t manage to speak about it, not with the trishaw drivers, nor with the couriers. So I was very eager to read Riding a bicycle in Yangon is like betting on your life in Frontier Myanmar. It turns out that riding a bike is prohibited (just like motorbikes – we were acquainted with that story), and that -no surprise regarding the headline- locals perceive cycling in Yangon as risky as well. But … more and more people are doing it, and grassroots action is taken (by Bikes in Yangon) to promote cycling in Yangon, to make it safer and to encourage more people to travel by bike. Spokesman Zwe Pyae of Bikes in Yangon is promoting cycling in the city as an alternative way of transport and a way to combat social isolation, by pressing to change regulations and laws for cyclists.

So thumbs up, Zwe Pyae! Let’s hope the mission succeeds. We’re spreading the news and maybe hooking up with other cycling enthousiasts in the city (i.e. Bike World Myanmar) might strengthen the actions to move Yangon out of its mobility crisis. Most importantly, for Yangon citizens to get around in their city more easily and more safe. But, also a bit for ourselves … it was just such a great experience and we hope to be able to do it again!

Do you consider Myanmar as a destination for your next cycling trip? Then you’re at the right spot! This blog contains stories and loads of information and tips that will help and inspire you in planning a trip to this wonderful country. Also, it bundles other blogs and sites on cycling in Myanmar.

With this website we hope to inspire and inform other cyclists. Crawling its way out of decades of military oppression, the country is opening itself to visitors. It is very special to be a witness, spectator and part of that, in all its visible and invisible, joyous and sometimes painful aspects.

Just bike, relax and see. The adventures will come by themselves.